Give Me a Real Fix 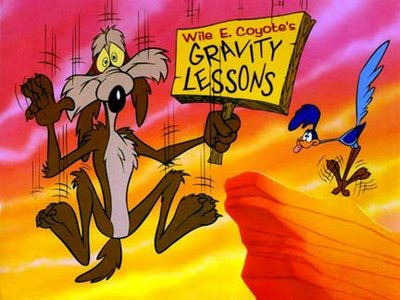 Well it was another down day on Wall Street. All of the news seems pretty gloomy, from Sands corp. potentially defaulting on their debt, to the big 3 needing ridiculous amounts of money to simply keep from bleeding out. The problem is becoming so complex it is beginning to show that every move to stem the tide results in a cascade of new problems to deal with.

The solution in the short term is to restore confidence and force banks to loan and get people purchasing again on credit. It is unfortunate that this is not a good long term solution. The long term solution is simply that we need to go through an extremely terrible period of economic contraction and get ourselves on solid ground again.

I took over a restaurant in Florida for my father and when I took it over it was extremely over leveraged. The Manager had this great idea that he would have 50 different types of wine by the glass and had increased his inventory accordingly. Trouble is they weren't busy, the food was mediocre, food costs were high, liquor costs were high, beer costs were high, and to make matters worse they were marketing the hell out of themselves trying to drum up business. All that was happening was they were really advertising that the food was bad and the service mediocre, not something you want the public to see necessarily.

The solution was a bit painful. We had to lay off excess staff, stop buying convenient expensive food from Sysco and start making the food from scratch (thus helping food quality and food costs), had to sell a bunch of wine and a deep discount just so that we could pay the invoices and get the expense off the books, and had to do training with staff on service and how are bartenders were pouring beer, liquor, and wine trying to get a handle on costs. It took the better part of 4 months to get our arms around everything. Once we did the restaurant started to do better, hit a break even and then a small profit consistently. The problem was it was a small profit. Really wasn't worth all of the work to keep the restaurant open. My father decided to sell it and we were able to because it had become somewhat profitable.

So what does this have to do with todays economy? Let me finish the story.

For some, this experience may have soured them on owning a restaurant. For me it simply got me excited. I knew exactly what had to be done to make a restaurant successful and exactly how to do it. I moved to Utah and started my own restaurant and they were wildly successful. Well worth the many hours of work both monetarily and for the extreme sense of accomplishment that came with producing a superior product at a competitive price.

I beleive it is the same with our current economy. It is not enough to get it back to the way it was. That will likely be reflective of my first restaurant experience. We can probably kill ourselves and get the economy back to hobbling along even increasing GDP over the course of the next few years or even decades, but the fundamental problems will still be there and there comes a point where you have to decide what we are doing is wrong headed based on bad principles.

You can not run a business by squeezing the margins and using leverage. Leverage and paying interest on that leverage are the most sure fire way of failing. The problem with the first restaurant it was over "nutted". The cost of setting up the restaurant and the rent were simply too much for the restaurant to sustain with above average profits. It couldn't afford the monthly interest payments and rent consistently. Similarly our banking sector, auto industry, healthcare, construction, and virtually all of our major industries are in the same boat. They are over "nutted", they can't crack the nut.

We need to stop trying to crack the nut with incorrect instruments. We need to reasses, re-evaluate and simply decrease the size of the nut (deleverage) and buy a nut cracker (re-tool, and re-invent) the American economy.

The fundamental problem with the banking sector is that is chasing smaller and smaller margins with more and more leverage. We need to regulate the leverage and stop hoping they will lend again in the unhealthy way they have for the past 10-15 years. They need to clean up their balance sheets and be regulated. They need to go back to traditional business methods making their money from loaning out money and holding those loans, not from investments and derivatives.

The auto industry needs to stop asking for money from the government to stop the bleeding and sit down with the governement and union and come up with a new solution for worker benefits. Perhaps an addendum to social security for auto workers or another solution. Those legacy costs the big 3 are trying to handle simply aren't manageable and were wrong headed. The were great in the beginning they have grown to be to cumbersome to allow the auto industry to survive. We can leave it the way it is and loose the entire industry or we can fix that and then re-tool those auto plants, making better cheaper cars and other products. Until we deal with the legacy costs we aren't even talking about the problem.

Health care is simply ridiculous. As long as peoples diets are going to favor junk food and crap and people don't get exercise we are going to have more and more health care problems. I'm not suggesting regulating what people eat or forcing them to exercise, I am suggesting taxing unhealthy food to help pay for the health care needed by those who consume it and a "healthy weight" tax incentive for people. Will it hurt fast food joints sales, absolutely and hopefully they will come up with healthier alternatives in portion sizes that are more realistic for Americans. The chicken salad with a healthy dressing may cost 4 dollars vs. the Triple Whopper with cheese king size costing 15 dollars.

These are all possible solutions to problems that need to be further discussed and evaluated but this is the direction we need to head. If we are not going to talk about the real problems and deal with them we simply will continue to delay the inevitable. And the longer it is delayed the worse the correction will be.

We as American citizens need to come to terms with our overspending debt(leverage) and interest payments. We need to reign in the idea of wanting something and buying it on credit. For the next few painful years we need to let the government re-tool and spend on infrastucture and projects that ultimately benefit us albeit in the future so that we can try to keep unemployment from shooting up. At the same time we need to demand real solutions from Washington and be willing to pay for the real fixes. It is going to be a tough couple of years. Stay out of debt and hold on.
at November 12, 2008