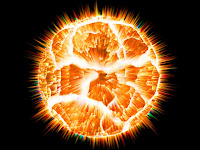 I've been thinking recently of this 2nd Stimulus plan that the press and the politicos are throwing around flippantly. A 2nd Stimulus plan after the first and after the 700-1 Trillion dollar bail out may be excessive, however, I thought I would throw out an idea to be kicked around. I haven't thought it all the way through and encourage people to poke holes in it and see where it flops.

Here goes: The housing crisis is at the heart of this gigantic problem, and according to many will be at the heart of the "fix". So how do you fix "housing" on Mainstreet and Wallstreet at the same time while encouraging de-leveraging and, more prudent banking practices and more fiscal responsibility on the part of every day citizens without completely discouraging spending?

What if we (the government and thus taxpayers) were to pay the difference between the purchase price of homes for the last 8 years and the current value of the homes, off to the banks thus "righting" all of those that were upside down in their payments.

Now the government steps in and pays the bank directly $100,000.00 (the upside down portion). The bank would then be required to re-write the mortgage now for 350,000 at today's interest rate at either a 30 year amortization schedule or a 15 year amortization schedule (this item would be up to the borrower) and the mortgages get "fixed". It would be up to the home owner to apply for this assistance (similar to a refinance, albeit with the help of "Uncle Sam") to his mortgage company and the mortgage company and the homeowner would work with the government to make the mortgage. If the government would do this they would require fully documented loans and those that wouldn't otherwise qualify, too little income, to much debt (excluding current mortgage) would not qualify for the assistance and not be rewarded for their bad behavior.

Now for some details. In order to protect "Uncle Sam" the Government would take a 2nd on the property and would receive monies if the house appreciated in value from the time the mortgage got fixed till the house was sold. Hopefully over time this would give the government some protection and return on its money.

This Fix allows the banks to receive an infusion of capital from the government however, Mainstreet is getting some relief as well. The banks are then in the position to do 2 things, free up lending and de-leverage in a controlled and specific fashion. Citizens get out of these crazy 4-10,000 dollar monthly payments from these negative amortization products that have been out there. They may have a higher payment then they want but they will be able to stay in their homes and house prices across the country will adjust in a way that won't cause widespread panic and chaos. The realestate industry, lending, bonding, and construction industry would all begin to recover, albeit at a slower rate.

This fix needs to be coupled with some strict lending oversight to discourage banks from beginning the wild loan gluttony of the last 10 years.

Now for some numbers: there are approximately 13.98 Trillion worth of mortgages in the US. If we assume that 1/3 of them are upside down and in trouble that would equal 4.66 trillion dollars. Now assume that 1/4 of those mortgagees simply wouldn't and shouldn't qualify for a home, that would reduce the number to 3.495 trillion dollars. Assume those mortgages would need to be re-valued at a 20% discount. What amount would this possibly cost the government and taxpayers? Approximately 699 Billion dollars or equal to the 700 Billion dollar bail out the government just did and is doing.

I need some feedback and encourage people to poke some holes in this idea. It all came to me on my drive home and I'm not confident it works well. Fun to think about and discuss, have at it.
Email Post
Labels: Economy and Investing

FORTUNE: There’s a huge risk to the U.S. economy right now—and almost no one is paying attention