I'm digressing from my infrastructure project idea to talk about the overall economy for the moment.

I am and was a supporter of Barack Obama, not becasue I agree with many of his social positions but because he seemed intelligent, and principled. I really hope that plays itself out, but I'm a little annoyed at some of his cabinet picks. What is with the tax problems? How can we expect Geitner and Daschle to fix our economic and health care problems when 6 months ago they were in violation of tax laws and had under reported their earnings. That is like having the fox watch the hen house. Probably a bad idea. I don't know who else you could tap for those positions but it is very disappointing that many of our new leaders have such bone headed problems. It does not give me a great degree of confidence that they can fix our problems, just that they are politicians, which like many, I simply don't trust in general.

As far as the problem I was shown an interesting power point presentation this week which was disconcerting. Here are a few images: 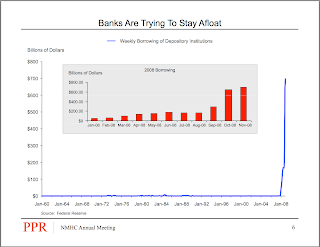 This slide is simply horrifying. We are seeing banks have to draw down against the Federal Reserve for a historically ridiculous amount of money. I'm not sure how this is even possible on a long term potential, but even in the short term this is a huge sum of money. Why do we think that the banks will stabilize if we give them more money? It does not seem likely. Not sure what the answer is, other than to let banks fail and the Fed to step in as a depositor insurer and basically start over. 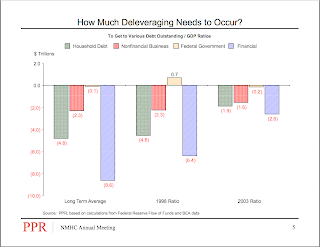 In this slide we see the enormous debt we have gotten ourselves into. Debt is an interesting thing in America. There are some who believe that because we are America and because we have a stable government, the rule of law etc. we are a better bet, from an investment standpoint, than England, France, Brazil, etc. And as evidenced people buy our Treasury certificates loaning us money. The 10.5 trillion dollar question (amount of our current outstanding debt) is how long will foreigners continue to loan us money and how long will we be able to make our interest payments before those interest payments completely eclipse an enormous portion of our national spending?

I watched I.O.U.S.A. this week, it is more cerebral than entertaining, but a good film to highlight this problem. Check it out if you get a second.


Indefinite debt is a disaster, it is imperative that as we decide to take on this debt (stimulus package) we do so with the long term payoff in mind. We need to figure out how we are going to pay off this debt and reduce our spending. It doesn't seem prudent to simply except that we will need to borrow for daily operations forever.
at February 01, 2009