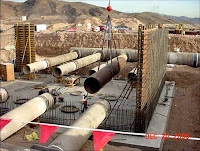 I was moved today by Obama's speech and the inauguration. It was cool, for lack of a better word, to watch today. I'm hopeful he can remain true to his idealism in the face of our large economic challenges problems, wars, etc.

I've been working on an idea for several months which, after today's speech, I've decided to make public and seek public support for, advice for, criticism for etc. Obama et al talk of infrastructure projects that we need to do for the country to help with Jobs. I've been on the critical side in the past simply because most of these "shovel ready" projects won't really create jobs they will simply put a tourniquet on job loss. To really create jobs and make a difference we need to look at massive projects even larger than projects like the Hoover Dam and the Highway program of the 30's.

There are many problems with a project of this size, the largest of which, of course is government and government bureaucracy. But after the speech I'm going to take President Obama at his word. So here is my plan.

We clearly need an updated and more secure energy grid, water distribution grid, and internet grid to be competitive with the world and help us become less dependent on foreign oil. Solar and Wind are great but without a viable grid they are pointless. We have flooding where we don't need flooding and drought were we sure could use some water. The internet is the great leveler and likely, job business and enterpenurial tool of our future. That said let's pay the money and put in the grid.

I initially had a plan to start with a water pipeline form the upper Mississippi to Glen Canyon Utah. That pipeline would cost about 5 billion, of which 2 billion would fund an endowment to maintain it. Upon further thought I think we can make a better pipeline cheaper and more intelligently incorporating energy and the internet. I will do several blogs over the next few weeks outlining my plan. Feel free to criticize and point out the error of my ways I think it would be helpful in fleshing out the idea.

For now the gist is a grid of water, power, and internet across the entire United States. More to come. I do recognize it is a bit presumptuous on my part to think this hasn't been thought of or that is unrealistic but I'm going to put it out there anyway.
at January 20, 2009